April 11, 2016
TBS6903 Professional DVB-S2 Dual Tuner PCIe Card is the new tuner from TBS, which is basically the same board as the TBS6983 but with the new FPGA-based PCI-E 2.0 bridge. The purpose of the FPGA is to ensure backward compatibility with the existing motherboards and also with the latest chipsets.

Due to the fact that TBS 6903 DVB-S2 tuner is on the professional side, the package does not contain a remote control or IR sensor; instead the package contains a CD equipped with software/drivers, a power adapter with a HH motor and a low profile bracket (to facilitate the usage against a SFF HTPC/IP streaming server/system). A couple of features will make this DVB-S2 PCIe card stand-up: EUMETCast Compatibility, VCM, ACM,16APSK,32APSK, Multi Input Stream, Generic stream mode and Blind scan support. Another advantage is that the card can lock on transponders with symbol rate as low as 200 ksps.

From a passionate user’s perspective the features enumerated above are the one that really counts when it comes to this RF tuner, therefore we can overlook the lack of remote control. Another important aspect that you have to take into consideration it’s the dual tuner capabilities. The drivers provided by TBS are fairly stable and periodically updated. On TBSDTV.com website we can find software like ProgDVB, DVBDream, TBS Blindscan, TBS IP Tool, TBS TS Recorder, drivers for Windows and Linux, documentation and a forum section where you can discuss and find the answer to most of your questions.

After installing the provided drivers, operation in Windows for the average user is out of the box and quite smooth: no hangs or lost packets. MIS reception from various satellite positions  is pretty straightforward, all you need to know is PLS code and stream number. The board is reactive on channel zapping, Motor movements and Diseqc switching, despite the fact that the power cable used for 12V delivery, needed for the motor, could be delivered with a higher quality cable. Reception of data transponders carrying T2-MI (DVB-T2 Modulator Interface) is also possible with this card and the 4T2 Content Analyser application. 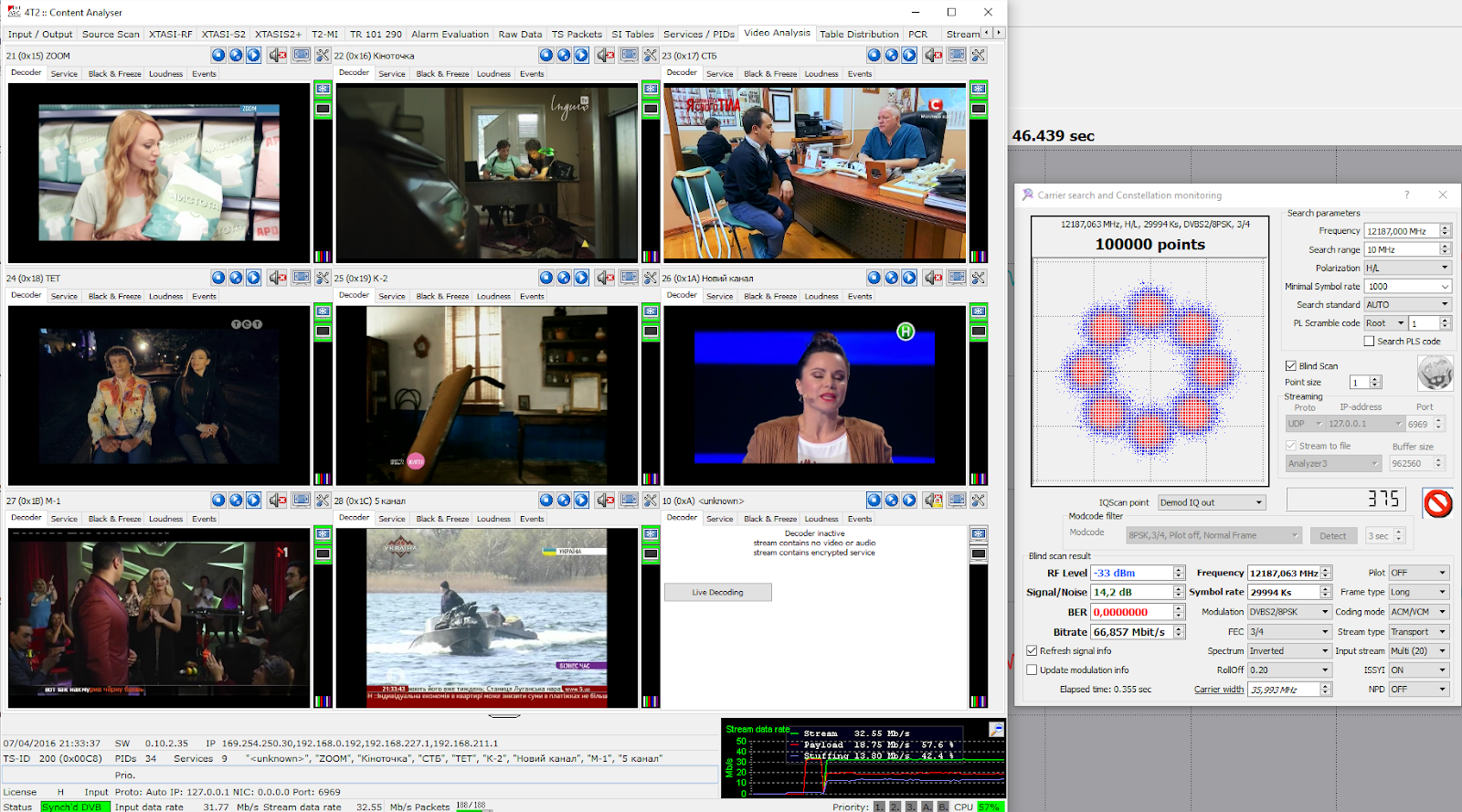 Variable Coding and Modulation (VCM) feature of DVB-S2 allows the selection of a specific, per-service combination of FEC code rate and modulation constellation (MODCOD) according to the per-service link budget. For each service, a choice of 32 different MODCODs—from QPSK 1/4 to 32APSK 9/10—is available, allowing dynamic selection of trade-off between robustness and capacity. As a result, within the satellite multiplex, services with different MODCODs may coexist. 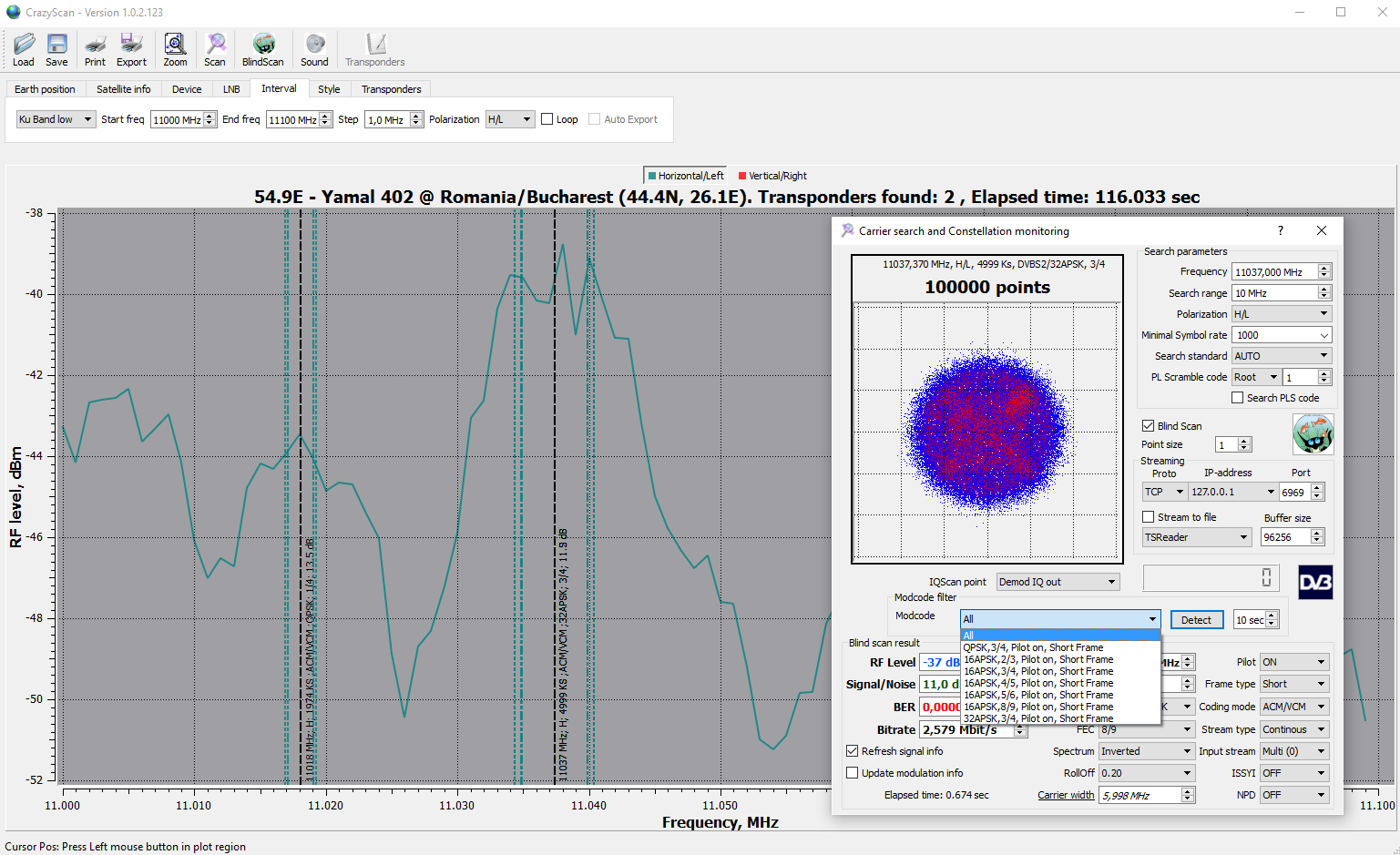 Adaptive Coding and Modulation (ACM) is the real-time adaptation of the Forward Error Correction (FEC) code rate and modulation constellation (MODCOD Field: Identifying the XFCE FRAME modulation and FEC rate) for a specific service, based on link quality feedback from the end user through the return channel to report reception conditions at the receiver. This information can be used by the service provider to achieve closed-loop Adaptive Coding and Modulation (ACM), thus allowing the transmission parameters to be adapted in real-time for each individual service, depending on channel state, as influenced by current weather conditions. ACM allows the reuse of the 4 to 8 dB of power (the so called “clear sky margin’’), which is typically wasted in conventional satellite links to compensate for occasional deep fadings, which very rarely occur. This technique increases the average satellite throughput and significantly reduces the service costs.2

How can TBS 6903 benefit from ACM in regular satellite reception systems where no link feedback is transmitted from each individual user?The answer is really simple: by the use of reception quality reports from the Probe Receivers back to the Satellite Resource Management System (SRMS). The efficiency of ACM is correlated with the density of Probe Receivers (standard receivers with C/I detection, connected to appropriate terrestrial or satellite return channel) deployed in the target area. For DX-ing reception is a nightmare due to constant changes in modulation and FEC rate uncorrelated with local whether but correlated with the weather from service provider target area.

Although these modulation schemes can be deployed with CCM in order to boost spectral efficiency, in this case the beam coverage will shrink. The obvious gain can be achieved only in combination with ACM, to take advantage of “clear sky margin”. That is without modifying end user reception systems (mainly antenna size).

MIS allows aggregation a number of independent transport streams or IP streams into one satellite carrier. For the average user, this is probably the most desirable feature of the TBS 6903. 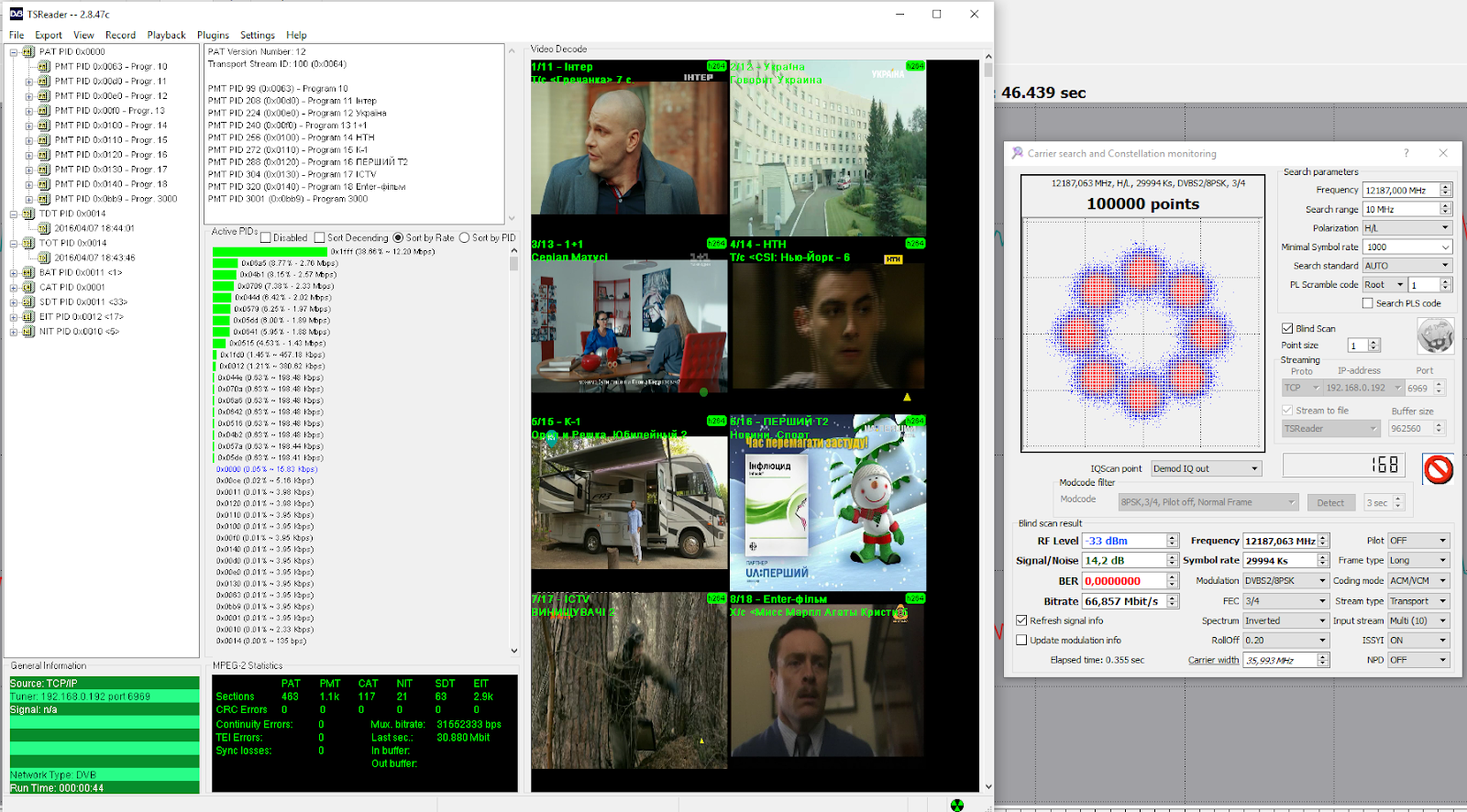 ZeonBud Package - multi stream 10 from 12188 H on Astra 4A @  4.8°E
Currently, there are a lot of  FTA TV channels broadcasted via MIS and the market only goes up. Several stations can be found at 5W with Rai Package, Mediset Package and French Channels, at 12.5W with Persidera(Telecom Italia Media) Package, at 4.8E with BSS Nordic Package, etc…

The blind scan feature allows scanning for unknown satellite transponder with symbol rate as low as 200 ksps, using TBS tool or Crazyscan tool. This features, in combination with a PLL LNBF, used for frequency stability, are a must have by the feed hunters.
After MIS/VCM/ACM support this must came on second place as most wanted feature from the new TBS 6903 Tuner. 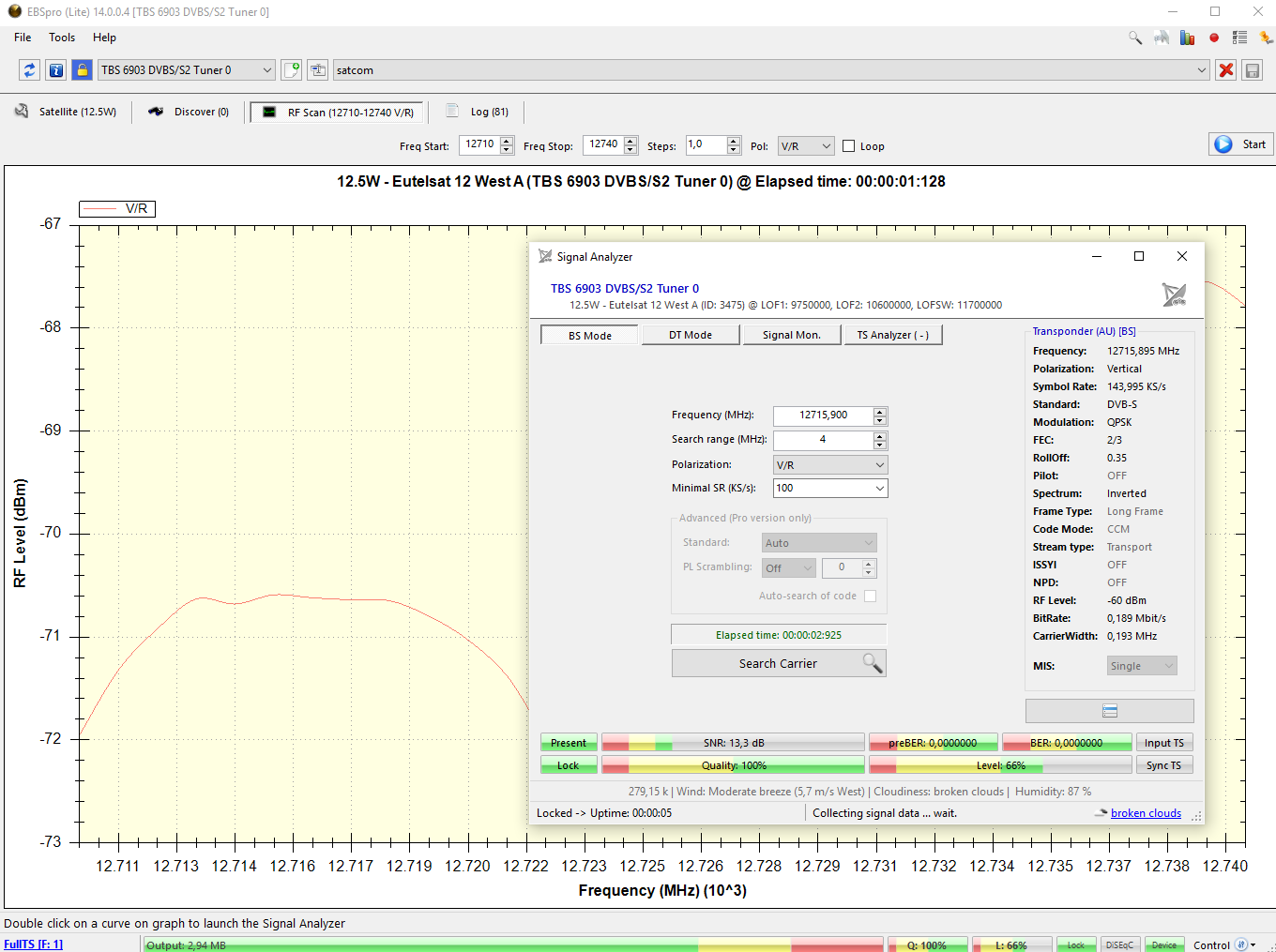 144 ksps is the lowest SR I could find, located on 12715.9 V Eutelsat 12 West B @ 12.5W, the SR is well below the known TBS 6903 lock capabilities of 200 ksps. Due to LNB used, Inverto IDLB-SINL40-ULTRA-OPP, which has a LO frequency stability of +/-1 MHz (Max)@ Room Temp was not an easy task to get a transponder lock . A more recommended LNBF for this type of signals are the PLL(Phase-Locked Loop), with at least +/- 300 KHz LO stability, instead of the classical DRO(Dielectric Resonator Oscillator).
The tuner achieves a stable RF signal even under bad weather conditions and it has an impressive RF sensitivity. 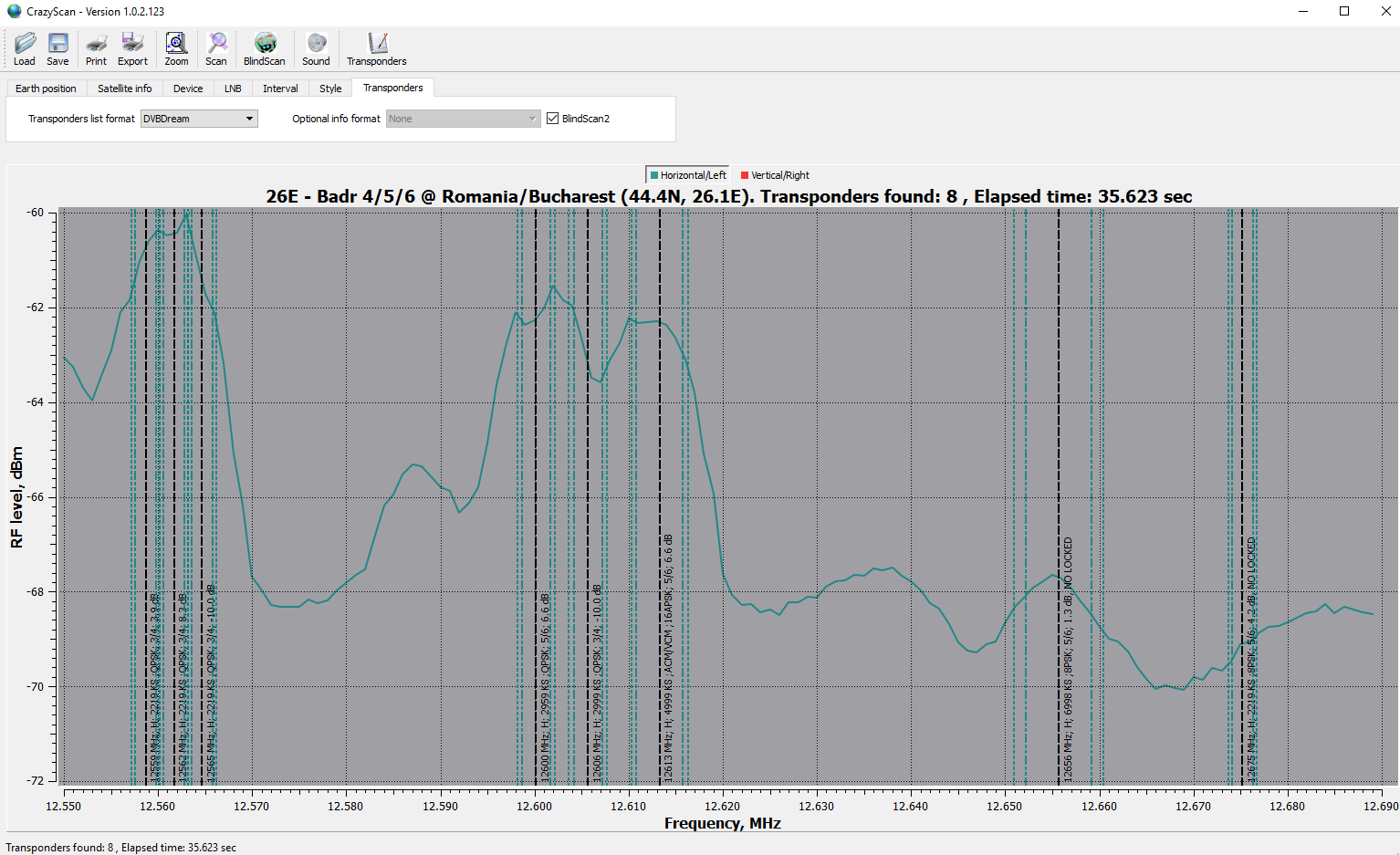 When “Blind Scan 2” mode is activated, (option enabled in Crazyscan tool), the TBS 6903 unleashes the hardware accelerated edge detection and the ability to find unlockable transponders with negative link margin. This mode is more accurate and way faster than the default “Blind Scan” mode.

DVB-S2 standards features backwards compatibility modes for carrying MPEG-TS as well as generic modes for carrying arbitrary packets of variable length, referred to as Generic Streams (GS). The GSE protocol has been devised as an adaptation layer to provide network layer packet encapsulation and fragmentation functions over Generic Stream. GSE provides efficient encapsulation of IP datagrams over variable length Layer 2 packets, which are then directly scheduled on the physical layer into Base Band frames.GSE provides a more efficient system operation for interactive systems that utilize advanced physical layer techniques such as for instance Adaptive Coding and Modulation (ACM). The inherent channel rate variability experienced in ACM systems makes the Generic Stream format more suited than the TransportStream. GSE provides a flexible fragmentation and encapsulation method, which permits use of a smart scheduler to optimize system performance, either by increasing the total throughput and/or by improving the average packet end-to-end delay. In addition, GSE flexibility leads to a reduction in packet loss under fading variations, allowing the scheduler at the transmitter to dynamically change transmission parameters (for example modulation format, coding rate) for a particular network layer packet.3
Even though this feature looks appealing, it is used only in closed systems, mostly in professional implementations. For the time being, only a handful of hobbyists are looking into this area.
TBS has an impressive portfolio of DVB cards both PCIe and USB, delivered with an equally impressive amount of software products supporting it’s HW.


It is well know that TBS Professional grade TV tuners are among the most affordable DVB-S2 cards with best in class support from the CrazyScan creator. Afterall, the TBS6903 Professional DVB-S2 Dual Tuner PCIe Card is a recognition of TBS as a top leader in DVB industry.

Popular posts from this blog

February 12, 2018
When it comes to monitor your mining rig the solution is straightforward, TeamViewer the number one choice when talk about remote access can sometimes fail without notice. My solution comes from a solid piece of hardware build by TBS, a HDMI video/audio encoding device  intended for professional used, which means that will not fail  when you need it most. The TBS 2603 HD H.264/H.265 HDMI audio &amp; video encoding device supports 1 channel HDMI stream of H.264/H.265 encoding output and the AAC, Mp3 audio format. From any HDMI input source,  it generates an H.264/H.265-encoded stream compliant with multiple HTTP/RTSP/RTP/RTMP/UDP  protocols. Combined with a cheap HDMI switch with remote control capabilities (with IR code sent through  TCP IP to a IR blaster) we obtain an efficient way to monitor and debug few mining rigs when  those fail to respond to conventional monitoring software. I’m using the encoder with the latest firmware release v1.1.12, the update from base ve
1 comment
Read more